This blog post from The New School Economic Review was one of the few critical reviews written on Bill Easterly’s book ‘The Tyranny of Experts’. Thus, it ended up being picked up by Al Jazeera and the author debated Easterly on The Stream.

William Easterly and ‘The Myths of Development’

Monday March 3rd Bill Easterly launched his new book ‘The Tyranny of Experts’ at NYU. Economists and development practitioners in the New York area filled the seats of the auditorium, eager to hear what the famous aid critic had to say.

His presentation is excellent. Lightheartedly, he delivers a clear and appealing message, intertwined with carefully planned and well executed jokes. He even has a separate joke slide in his power point, much to the audience’s amusement.

Bill centers his presentation on three development myths. The first one is The Myth of Technical Solutions. All too often, experts recommend solutions that fix immediate problems without addressing the systemic political factors that created them in the first place. This is important criticism that is hard to disagree with.

Bill shows striking similarities between Lord Hailey’s Africa Survey from 1938 and a UN report on development from 2005.

Through time, it has not only been dictators and colonialists that have ascribed to the idea of technical, small-scale solutions as the road to development, but also philanthropists and development workers around the world. Bill is probably right in arguing that this idea, although faulty, has been accepted partly because people truly believe in it and it is a dominant discourse. More importantly, however, it conveniently gives aid workers a central role to play and provides donor governments with a distraction from more sensitive macroeconomic and political issues. The audience gets another laugh when Bill admits that he was one of these blind technocrats when he himself worked at the World Bank. Now he is reformed.

2. The Myth of the Blank Slate

The second myth is the concept of a blank slate, a view that has endured since the ‘beginning of development’ six decades ago. The common perception is that countries begin with a blank slate and that development happens when today’s leaders decide that they want to execute developmental policies. Also, Bill adds, development did not really even begin in 1949 when Truman announced that ‘humanity for the first time possesses the knowledge and skill to relieve suffering of these people’.

In fact, thirty years earlier, Woodrow Wilson declared to the League of Nations: ‘For the first time in history the counsels of mankind are to be drawn together for the purpose of improving the conditions of working people’. Sound familiar? If so, that may be because you heard the same thing from World Bank president Jim Yong Kim last year, when he announced that ending poverty is finally an achievable goal and that we can be the generation to end poverty.

3. The Myth of Authoritarian Growth Miracles
Bill’s points so far are important. There are a lot of misconceptions about development out there that can lead to destructive policy prescriptions. However, Bill’s third myth, the myth of authoritarian growth miracles, reveals some fundamental flaws in his argument. Bill argues that it is in fact not authoritarianism that has spurred growth in China and the East Asian Miracle (EAM) countries of Singapore, South Korea, Taiwan and Hong Kong, but an increase in personal freedom. 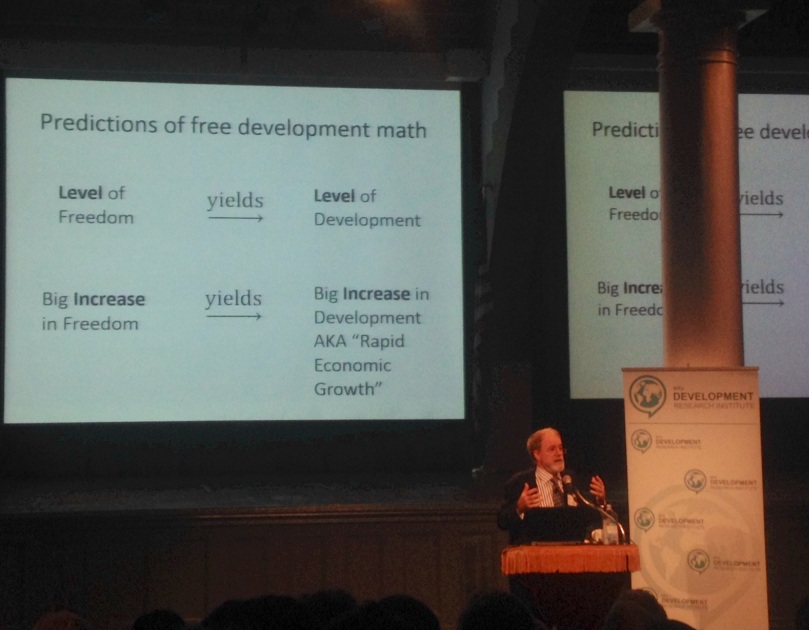 Bill makes it clear what he believes to be the cause of ‘development’ (economic growth).

This is a popular argument among economists, championed by Daron Acemoglu and others, but there is little evidence to support it. In fact, economic historians who have carefully studied development trajectories of the West and of the EAM countries find that personal rights came into place after the countries reached a certain level of development (see Ha Joon Chang’s work on this for more details). In fact, rich countries did not become rich by offering their people freedoms, but by stimulating development through context-specific government interventions such as active industrial policies, trade policies and ‘governing the market.’ Individual freedom and individual property rights came later. This is not to say that political and economic freedoms are not valuable in their own right. But there is no evidence suggesting that these freedoms cause development.

Strikingly, by seemingly busting the myth that authoritarianism induces growth, Bill is leading people to believe that this is in fact a common perception. He is clearly building a straw man argument here, as those who point to the EAM countries as ‘success stories’ (e.g. Alice Amsden, Robert Wade, Ha-Joon Chang) do not attribute their success to authoritarianism, but to the active industrial policies pursued by their governments. Democratic governments might just as well pursue such policies.

Although Bill Easterly might like to portray himself as being outside the mainstream by criticizing Jeff Sachs, the World Bank and big aid projects, this last myth exposes his allegiance with mainstream economics and ignorance of economic history. Indeed, a more pressing myth to bust would be the Myth of Private Property Rights.

One thought on “William Easterly and The Myths of Development”