A stylised fact that characterises modern economies is that part of the installed productive capacity is persistently idle. By productive capacity I mean the productive equipment (mostly fixed capital goods) in existence, together with that part of the workforce which is required to operate it. As we can see in Figure 1, in countries as diverse as Belgium, Finland or Lithuania, the effective utilisation of installed capacity often gravitates below 100%, and around 80% on average worldwide.

The academic consensus is that there are large margins of idle capacity planned by entrepreneurs. The reasons why entrepreneurs plan to operate with idle capacity vary according to the school of thought considered. At the risk of making a drastic simplification, we can say that while some authors think that entrepreneurs do so in order not to lose market share in the face of changes in demand, others tend to think that there is a rate of utilisation of installed capacity that does not accelerate inflation (Non-accelerating inflation rate of capacity utilisation, NAICU).

END_OF_DOCUMENT_TOKEN_TO_BE_REPLACED

This recently published introductory Macroeconomics textbook written by Alex M. Thomas provides a refreshingly novel approach to teaching Macroeconomics to undergraduate students. As the author points out in the Preface, this textbook offers a “problem-setting approach rather than a problem-solving one, as is the case with most economics textbooks” (Page xvi, emphasis mine). The textbook has nine chapters, and the chapters have enough material to whet the appetite of a broad audience – Chapters 1,2,6 and 9 deal with the history and philosophy of Macroeconomics, Chapters 3-5 deal with the core economic theory of money and interest rates, output and employment levels and economic growth and Chapters 7 and 8 talk about the macroeconomic policy of achieving full employment and tackling inflation. In this review, I would focus on four issues – the commitment of the book towards enhancing pluralism in Macroeconomics, the importance given to studying macroeconomic theory, the idea of relating macroeconomic concepts to the context which is being studied and an explicit concern to make Macroeconomics accessible to an undergraduate audience residing in underdeveloped parts of the world.

END_OF_DOCUMENT_TOKEN_TO_BE_REPLACED

Simply speaking, development macroeconomics can be summarized as the challenge of improving productivity and production capacity in poor countries. This involves the conditions that need to be fulfilled for a development process to start as well as the policy framework and instruments that support it. Heterodox approaches consider the state’s role in steering productivity growth as essential (Cardim de Carvalho, 1997). Markets may be able to exploit price signals and adjust resource allocation correspondingly. However, they guarantee neither sufficient profitability of key sectors nor the demand for the goods produced. Both the profit rate and effective demand are conditions for investment to take place (Oberholzer, 2020). It is thus up to the government to make public investment in priority sectors and to apply instruments such as taxes and subsidies in ways that simultaneously allow for economies of scale, higher productivity large-scale employment and demand. This is what is generally referred to as industrial policy (see for example Chang, 2006; Oqubay, 2018).

But this is not everything. Policymakers have to pursue such a development strategy in face of an (often permanent) shortage of foreign currency. While domestic currency can be generated via the domestic banking system including public development banks, the availability of foreign currency is limited unless a country is able to increase exports or restrict imports. Since larger export capacity and a higher degree of import substitution are long-term goals, the current account is determined by domestic and foreign economic growth. This insight has come to be known as the balance-of-payments-constrained model or Thirlwall’s law, respectively (Thirlwall, 1979, 2013): it is reasonable to assume that demand for a country’s exports grows in income in the rest of the world while imports increase with domestic economic growth because a part of increasing incomes is reliably spent on imported goods. Therefore, stability in the balance of payments requires that imports do not grow faster than foreign exchange earnings via exports allow. A limit to the growth of imports implies a limit to the country’s economic growth, hence the balance-of-payments-constrained growth rate.

END_OF_DOCUMENT_TOKEN_TO_BE_REPLACED

In April 2021, Ivan Duque’s administration presented a tax reform bill labeled “Law of Sustainable Solidarity” to Congress. The bill contemplated an increment of the VAT on basic goods in conjunction with an increase in the marginal tax rates on the income of the so-called Colombian middle class. The vast majority of whom earns monthly less than 4,000,000 Colombian pesos (around 1,065 U.S. dollars). Although the bill put on the table contained some crucial elements for discussion, such as implementing a “basic monthly income” of 21 U.S. dollars (by far less than the current minimum wage). It contained little or nothing to effectively tackle Colombia’s high social and income inequality (with an official GINI of 0.526 for 2019).

The tax reform bill was presented in the mid of a severe economic and social crisis that had worsened due to the pandemic and against which the Colombian government has done hitherto little beyond the orthodox recipes. This triggered a general strike and nationwide social mobilizations that have already lasted over more than two weeks without any clarity as to their resolution as yet. The current social protest can be considered a continuation of a general strike that erupted at the end of 2019 and got into a rest due to the pandemic.

Yet, many elements behind the social movement go beyond dissatisfaction with the tax reform bill. Since 2016 after the peace deal between the Colombian government and the FARC, which used to be the oldest and biggest guerrilla in Colombia, the government hasn’t implemented most of the elements contemplated in the peace agreement. Also, although Colombia has had macroeconomic stability for more than 20 years, an indicator such as the official unemployment rate has consistently been above 10%. The level of poverty before the COVID-19 shock was near 32%.

Thus, the following question arises, what does it mean to have macroeconomic stability to the population? A call to think outside the box on what the government can or can’t do must be considered under other lenses. In view of the worsening of the social, political, and economic crisis in Colombia and the need to develop economic policy alternatives to the government’s orthodox position, a group of citizens and academicians wrote the open letter below to respond to those who argue the TINA mantra and believe that there’s a consensus in economics to support tax reforms amidst the COVID-19 epidemic.

END_OF_DOCUMENT_TOKEN_TO_BE_REPLACED 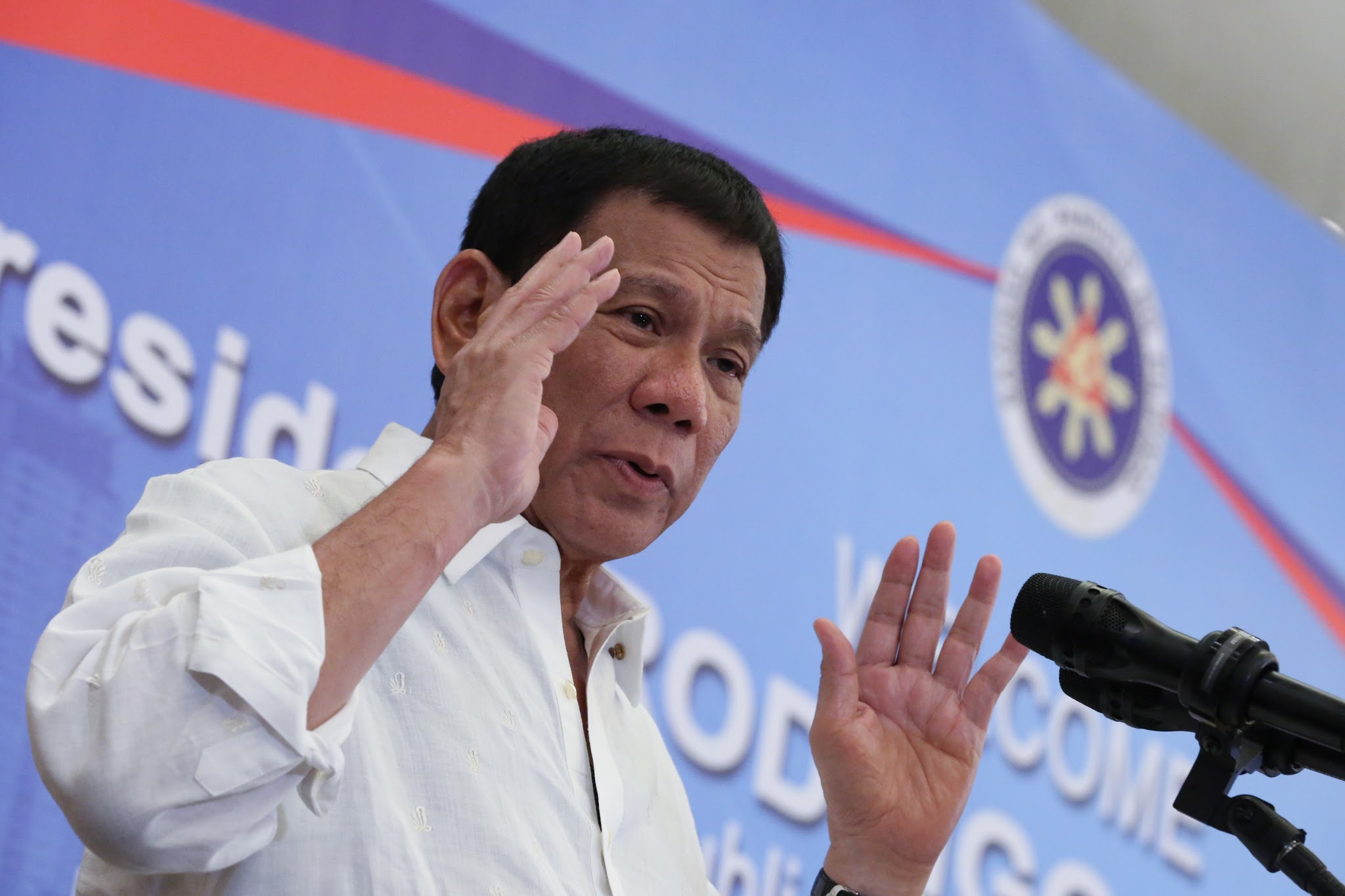 In his late-night Talk to the Nation on COVID-19 on 6 April, Rodrigo Duterte, the populist President of the Philippines, echoed the affirmation of leaders from rich countries in North America, Europe, and Asia: to do “whatever it takes” for the economy to survive the pandemic. The problem, however, is that, on his own admission, Duterte is incompetent in economics. His stubbornly militaristic mindset and police-centric approach to governance is even more problematic when dealing with complex developmental causes and impacts of the coronavirus outbreak.

Yet the Philippine state’s inadequate institutional capacity to respond to the epidemic goes deeper. Given the national economy’s position in the hierarchical global economic system, its structural weaknesses impacts on how effective the government’s response can be. The current mainstream approaches to resolve the pandemic and the multiple crises of capitalism would fail to address the convoluted historical process of maldevelopment of the Philippines. Thus, a radical political strategy with a new economic paradigm for post-pandemic reconstruction is needed.     END_OF_DOCUMENT_TOKEN_TO_BE_REPLACED

The macroeconomic consequences of the CODID-19 pandemic in the EU economy are materializing against the background of underlying structural challenges. Ensuring long-term convergence and stability between EU countries will require coordinated fiscal, wage and industrial policies. This blog post finds that EU countries are stuck on different trajectories in their economic development. Core countries, periphery countries, East European countries and financial hubs have responded differently to increasing European economic integration. This leaves Europe mired in structural polarisation, where political tension relates to diverging economic developments and increasing gaps in the evolution of technological capabilities. As a consequence, counteracting polarisation and promoting convergence requires a coordinated strategy that includes fiscal, wage and industrial policies.

Several EU countries were already on diverging macroeconomic development paths when the COVID-19 pandemic hit, but the macroeconomic consequences of the crisis must be expected to further accelerate existing divergences. Even though large parts of the EU experienced an economic upswing in the years running up to the COVID-19 pandemic, this temporary upswing in the business cycle served to mask the underlying tendencies towards structural polarisation in Europe, which will become more apparent over the course of the current crisis.

In a study recently published in the Journal of Evolutionary Economics, I argue with Claudius Gräbner, Jakob Kapeller and Bernhard Schütz that essential factors for explaining the long-term polarisation between EU countries are to be found in the unequal regulatory conditions in the context of the European ‘race for the best location’ (for example, in the areas of labour market, tax and corporate law or financial market regulation), as well as in the different technological capabilities across EU countries.

We show that technological capabilities in EU countries are distributed unequally; EU countries remain structurally polarised, i.e. they are stuck on different developmental trajectories that contradict the political goal of ensuring convergence and stability in the EU. Notwithstanding short- and medium-term cyclical developments, existing differences in technological capabilities will continue to fuel a process of economic disintegration in the EU if policy-makers fail to counteract the polarisation trend by introducing a coordinated policy strategy that should include fiscal, wage and industrial policies. END_OF_DOCUMENT_TOKEN_TO_BE_REPLACED 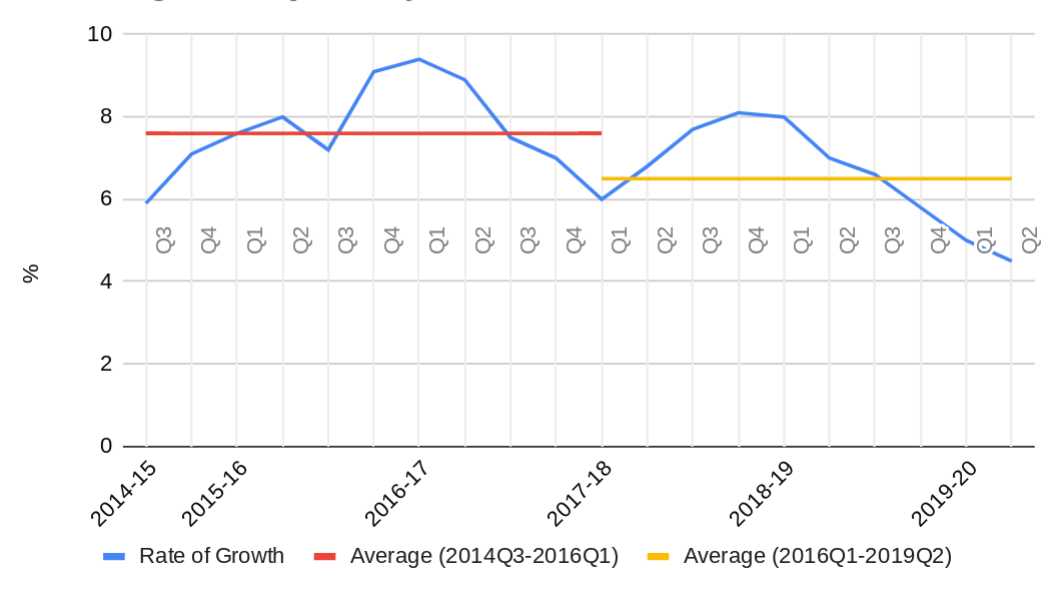 No, it’s not a recession, defined strictly in technical terms, i.e. on the whole, the level of activity hasn’t fallen, even though certain crucial sectors, like automobiles, are seeing a fall. What we have instead is a slow down, a severe one at that, with falling rate of growth of GDP for five straight quarters (figure 1). The Indian government is hiding behind economic jargon to obfuscate the reality that is biting the economy. The writing is on the wall. The Indian economy is facing a severe crisis and the sooner we come to terms with it, the better. Based on a recent paper in Economic and Political Weekly, this blog discusses the changing growth levels in the Indian economy, the reasons for the recent slowdown, and some possible short and long term solutions. END_OF_DOCUMENT_TOKEN_TO_BE_REPLACED

This month, the international community will gather at the United Nations in New York to review progress on the implementation of the 17 Sustainable Development Goals (SDGs) that are intended to reduce poverty, hunger and economic inequality and promote development, particularly in developing countries. But only one of the SDGs, #17, says anything about how to finance all the efforts. While SDG 17 calls for more international cooperation and foreign aid, it only suggests that developing countries strengthen domestic resource mobilization (DRM) by improving their tax collection and curtailing illicit financial flows, etc.

While important, this approach neglects much bigger problems with the prevailing set of macroeconomic policies that hamper the ability of developing countries to increase public investment, employment and scale-up the long-term investments in the underlying health and education infrastructure needed to achieve the SDGs. The policy framework used in many developing countries is characterized by an overly restrictive low-inflation target achieved by using high interest rates and backed up by strict inflation targeting regimes at independent central banks. END_OF_DOCUMENT_TOKEN_TO_BE_REPLACED