In a previous post, I wrote about the global trend of premature deindustrialization; the trend towards lower levels of industrial employment, and a shift away from industrial employment at lower levels of per capita income, and how the effects on human well-being of these trends are not yet clearly understood. An important question in understanding the impact of these changing structural patterns on individuals’ well-being is to whether either a lifting of the living standards of those not in formal employment, or the generation of employment to replace the manufacturing employment, is taking place.

In a recent working paper, I illustrated how combining a household level indicator of well-being with decomposition of change analysis can shed light on these questions by focusing on two specific episodes of growth; South Africa from 1996 to 2007 and Brazil from 1991 to 2010. Using Census data from IPUMS, I created indices of well-being on a scale of 0-100, using indicators such as child survival rate, access to clean water and electricity, and educations levels, culled from census data. Next, each household was assigned to a “type” based on sectoral employment of the household head and urban/rural location, and average household scores were calculated for each type. A decomposition of change analysis was then used to assign improvement in well-being to improvement within the types and shifts in population between these types.

Findings for South Africa
In South Africa, the initially poorer performing households and groups gained more in these measurements of well-being, both in a relative and absolute sense. However, it was also the case that while there have been gains in initially poorer performing groups, large gaps still remain, and the ‘catch-up’ has been insufficient to the extent that some groups were still performing worse in 2007 than even mid-level groups were in 1996. See Table 4 from paper, below.

The results illustrate the importance of location and employment category. The decomposition of change also illustrates that the majority of the improvement came from improvement within the lower performing groups, and much less of the improvement came from movement from lower to higher groups (See Figure 2 from paper, below). The biggest positive change from structural shift was towards low-level urban services, along with a shift towards high-level secondary jobs. The effect of this shift was positive, since the shrinking sectors were low performing types such as rural unemployed. However, households headed by low-level urban workers still trailed higher performing groups. 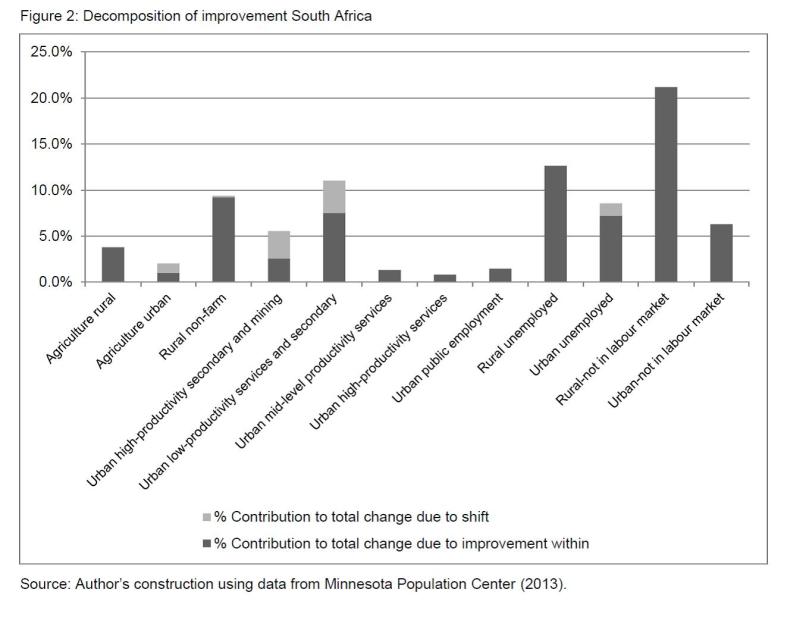 South Africa’s policies during this period involved big public investment in infrastructure, public services, health, education, and it certainly makes sense to attribute a great deal of the positive change in the lower performing categories to these programs. However, there was insufficient job creation during this period, and stagnation in labor intensive sectors. While there is no doubt that improved education and health among the unemployed is a positive achievement, it is also important to notice that despite these achievements, unemployed-headed households were still doing worse overall in 2007 than virtually all secondary and tertiary occupation-headed household groups were in 1996.

Findings for Brazil
In Brazil, there was less relative improvement from structural change. While in South Africa there was a shift effect from movement towards low level urban work, in Brazil, there is a large portion of the population already in such work, and the major source of improvement is within that type (See Figure 3 below). There was also a big portion of improvement explained by the improvement of urban not-in-labor market. Brazil increased its spending on transfer programs and on health and education throughout this period, and this undoubtedly helps explain these improvements.

Potential Policy Implications
One important difference from South Africa is that a higher portion of the population remained in agricultural work, and a substantial portion of the improvement also came from within that type, as well as in households headed by urban workers in low-productivity sectors. One important contrast between the two countries in terms of policy is Brazil’s supports for rural household income and rural agricultural production and South Africa’s failure to invest to the same extent in the productive capacity of the rural population. In Brazil, as in South Africa, the social programs, and, likely, rising wages for these lower level workers have led to improvement, but these groups still lag behind the better performers.

Both countries have raised the floor on living standards for the worst performing groups, certainly, but have not succeeded in truly allowing members of those groups to catch up. This result can be illustrated by the large remaining gaps between the lower and higher performing groups, and by the small to non-existent shift towards inclusion in higher performing groups. It is reasonable to suggest that despite the improvements for households in the lowest performing types, these households would be better off still if their household heads had the opportunity and ability to more productively participate in their country’s economy. These results suggest that Brazil’s recent attempts at employment generation through industrial policy may be a positive step to improve well-being. South Africa could potentially benefit from similar policies, along with some variation of the rural agricultural support introduced in Brazil.

One thought on “Consequences of Deindustrialization in Brazil and South Africa, and Potential Remedies”