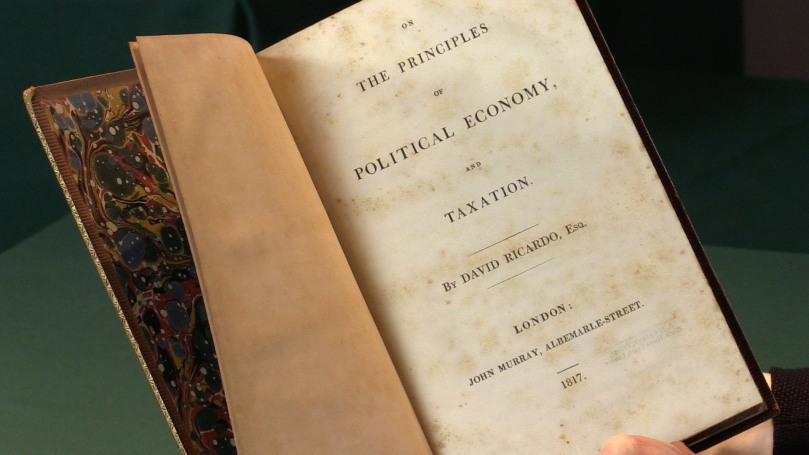 On Saturday, April 19th 1817, David Ricardo published The Principles of Political Economy and Taxation, where he laid out the idea of comparative advantage, which since has become the foundation of neoclassical, ‘mainstream’ international trade theory. 200 years – and lots of theoretical and empirical criticism later – it’s appropriate to ask, how is this still a thing?[1]

This week we saw lots of praise of Ricardo, by the likes of The Economist, CNN, Forbes and Vox. Mainstream economists today tend to see the rejection of free trade implicit in Trump and Brexit as populist nonsense by people who don’t understand the complicated theory of comparative advantage (“Ricardo’s Difficult Idea”, as Paul Krugman once called it in his explanation of why non-economists seem to not understand comparative advantage). However, there are fundamental problems with the assumptions embedded in Ricardo’s theory and there’s little evidence, if any, to back up the Ricardian claim that free trade leads to balanced trade. On this bicentenary, I therefore think it’s timely to revisit some of the fundamental assumptions behind Ricardo’s theory of comparative advantage, that should have led us to consider alternative trade theories a long time ago.

The Essence of Neoclassical Trade Theory
Before we delve into the assumptions, let’s quickly consider the basic elements of Ricardo’s trade theory (see here for a more in-depth overview). The well-known conclusion from the theory is that all countries will benefit from opening up to free trade (or at least that no one will lose), regardless of each country’s absolute advantage. The reason it is possible for everyone to benefit is because in a free market, the exchange rate will move to ensure that all countries will eventually become equally competitive (alternatively the equilibration will happen through the price mechanism, which is the case in Ricardo’s original example). This means that a country with no absolute advantage (England, in Ricardo’s example) will initially have a deficit, but then its currency will depreciate until it gains an advantage in what they are comparatively best at. Meanwhile, a country with an absolute advantage in everything (Portugal, in Ricardo’s example) will initially have a surplus of trade, but then its currency will appreciate until it loses some of its advantages. Through this equilibrating mechanism, trade will balance in the long run. The example also works with fixed exchange rates, as quantity theory of money is assumed so that prices will rise in the surplus countries and fall in the deficit countries, until countries are equally competitive and trade is balanced. It’s beyond the scope of this blog post to pick all the assumptions of the theory apart, but let’s go through some of the most problematic ones.

Assumption 1: Automatic Terms of Trade Adjustment
Perhaps the most fundamental assumption behind Ricardo’s theory is that a country’s terms of trade adjust to ensure balanced trade. This assumption is problematic on several accounts. First of all, a change in the terms of trade can have conflicting effects. Relatively low export prices means that each unit of export contributes less to the trade balance. At the same time, a lower price can lead to higher export volumes. In other words, the total value of exports can fall, remain the same, or rise, depending on the strengths of these conflicting effects. It is not given what will happen as the result of a change in the terms of trade, as it will depend on the price elasticity of the exports and imports. This ‘elasticities problem’ has long been known among economists, and was explained in detail by Abba Lerner’s (1944).

A related problem is the fact that changes in relative international prices can also affect the relative costs of these same products. This is related to Sraffa’s (1960) point that costs and prices are intricately connected since the costs of production depend to a large degree on the price of inputs. Therefore relative costs do not necessarily change at all as a result of changes in the real exchange rate. For example, if England’s real exchange rate depreciates this means it will be cheaper for other countries to buy English goods, but it will be more expensive for English producers to import inputs to production. While within Ricardian theory it may seem as if it’s possible to fix the trade imbalance through the exchange rate, a depreciation does not necessarily benefit exporters who are dependent on inputs from abroad. In today’s global economy, this is of great importance.

Finally, the assumption that the exchange rate’s role in the economy is to balance trade is on its own problematic. One issue is that empirically we see that terms of trade tend to move against primary commodity exporters (as first observed by Prebisch in 1950). Another issue is that there could be completely different forces driving exchange rate movements and that there is little evidence of the exchange rate actually adjusting to ensure balanced trade. On the contrary, persistent trade imbalances have been observed throughout the history of global capitalism (see Historical Perspective on Global Imbalances by Michael Bordo). The assumption of exchange rates adjusting in order to guarantee equal competitiveness among nations was first identified as a theoretical fallacy by Karl Marx and later Roy Harrod (1957), and Anwar Shaikh (1980).

Assumption 2: The Principle of Comparative Costs
The assumption of comparative costs is presented as a fact in Economics textbooks and classrooms around the world (Milberg 1994), despite the problematic issues inherent to it. Shaikh (2016) points out that a serious flaw in the way it is presented in neoclassical theory, is that comparative costs include both production costs and a normal profit rate in the production price. Smith and Marx argued that in reality there is no reason to believe that a firm is guaranteed a normal profit rate. Furthermore, Shaikh argues that in the real world, it is the firm with the lowest unit costs that decides the price, and the distinction between prices and costs therefore becomes crucial. If the international price of a good falls, the high-cost producers of this good will not be guaranteed a normal profit rate. On the contrary, the firms that are the most competitive and that are able to produce at the lowest costs will be those that survive, while the less competitive firms will be out-competed.

Other Neoclassical Assumptions
There is a range of other unrealistic assumptions underpinning Ricardian trade theory that are common to neoclassical economic theories. For example free mobility of capital and labor, perfect competition, and full utilization of domestic resources (see also 1,000,000 economists can be wrong: the free trade fallacies by Steve Keen). The assumption of full employment is important for the argument that free trade will  benefit everyone, as this argument cannot be made if it’s the case that free trade leaves large parts of the global population unemployed. While neoclassical economists often argue that temporary losses of jobs can occur in the face of trade liberalization, this raises the question of how long we are meant to passively wait before we get to full employment. Full employment is yet to be observed as a general rule, and in 2015 over 197 million people were unemployed globally, according to ILO (2016).

Furthermore, the assumption that labor is mobile between sectors (but not between countries) makes little sense in the real world. If we recognize that labor cannot costlessly and effortlessly move from one sector to another (e.g. to get to what the country has a comparative advantage in), the effects of trade liberalization become much less obvious. Moving from wine to cloth production, for example, actually requires investing in new capital and re-training the labor force, and does not happen automatically. This is a point also made by economist Ha-Joon Chang in a debate with former World Bank chief economist Justin Lin, as Chang is arguing for a comparative-advantage defying approach for developing countries (read the debate here).

Saving the Theory: Introducing Imperfections
In defense of neoclassical trade theory, neoclassical economists tend to argue that the reason we are not observing balanced trade is because of too much government intervention impeding the free market as well as a host of ‘imperfections’ that impede the perfect workings of the market. For example, Krugman attempted to explain observed outcomes by adjusting the assumptions of free capital mobility and returns to scale, while Stiglitz is well known for adjusting the assumptions of perfect information by introducing information asymmetries as imperfections in developing economies’ markets that explain why markets do not function perfectly. These insights have been incorporated into a ‘New Trade Theory’ (here’s Krugman’s own explanation of it).

The same is done to explain why we do not see exchange rates equilibrating over time to balance trade. Rather than accept that there is something wrong with the exchange rate theory itself, empirical discrepancies are explained by measurement problems and/or imperfections in the market because of currency ‘manipulation’ (see for example Eichengreen 2013 or Gagnon 2012). Many economists cannot imagine any reason for China’s trade surplus with the US other than the Chinese manipulating their exchange rate in order to stimulate their exports. If we were to consider a classical theory of exchange rate determination à la Shaikh, however, the Chinese surplus and US deficit could be explained by China’s lower costs of production in the tradables sector, compared with the US. Within that framework, the real exchange rate is not free to adjust to eliminate trade imbalances, and therefore the trade imbalance will persist as long as the real conditions remain the same.

So How Is This Still A Thing?
As with the issues brought up by John Oliver on Last Week Tonight in his How is this still a thing? segment, it can be difficult to understand why so many people are still staunch supporters of Ricardian trade theory, when it has seemingly been disproved. To understand it, we must first consider the obvious global dominance of neoclassical economics in classrooms, textbooks, academic journals and universities. It is not that difficult to understand why the basic tenets of Ricardo’s trade theory are still so widely respected, when we consider that alternative explanations are excluded from mainstream textbooks, journals and syllabi.

We must also take into account the political economy of trade policies, as there are strong private and public interests involved. Friedrich List (1841) is well-known for his observation that it is once a country ‘has attainted the summit of greatness’ that it tends to start advocating free trade policies internationally. In List’s time he was referring to Germany’s need to develop its own competitive firms while the United Kingdom was advocating free trade after having already built up a competitive export industry. Firms that are able to compete on the international market are likely to advocate for free trade policies (as are the countries hosting these firms), because this will enable them to gain larger market shares globally. For low-income countries that are unlikely to have many, if any, absolute advantages, free trade can be detrimental, as it can lead to the collapse of the little industry that they have and put them in a situation where they have to run persistent trade deficits and borrow externally to cover the deficit. Unfortunately, however, the observation of persistent imbalances (and recurring debt crises in the deficit countries) appears to have little impact on the popularity of Ricardo’s theory.

[1] Hat tip to John Oliver of Last Week Tonight who started the How is this still a thing? segment to question the strange things we still do and believe despite them being seemingly outdated, and often times also offensive (e.g. celebration of Columbus Day, the Commonwealth Games, Dressing Up As Other Races, and Ayn Rand).

The photo is taken from PeterHarringtonBooks reading of Principles.

9 thoughts on “200 Years of Ricardian Trade Theory: How Is This Still A Thing?”