When it rains, it pours. For emerging markets, the downpour has come in the form of credit rating downgrades by the big three global ratings companies. Fitch, Moody’s, and S&P took a record 1,971 negative rating actions on emerging market sovereign and government-related entities in 2016. Emerging economies are right to be concerned. With a ‘good’ credit rating (AAA), a sovereign state can borrow at very low rates of interest from investors. A poor rating could force states to pay significantly higher borrowing costs. Rating downgrades could have negative ripple effects throughout the affected economies, raising the cost of borrowing for banks and firms, and, in turn, consumers.

Infrastructure projects, business ideas, and consumer credit extensions, become unprofitable due to the higher cost of credit to banks, businesses, consumers, and governments. If a country is downgraded to ‘junk status’ (more formally known as ‘non-investment-grade’ or ‘speculative-grade’), it risks the mass exodus of investors from its bond markets. As the cost of borrowing for governments increases, this can lead to a dangerous downward spiral as borrowing and spending dries up business and consumer activity declines.

Getting back on course
So what is the best set of policies for emerging markets to recover their credit ratings? On one side are economists who argue for ‘austerity’. In their view, recovering from a ratings downgrade requires sharp reductions in state spending, even if this results in poor conditions in the short term. The benefits are twofold: It can reduce inflation and prices, thereby helping restore a country’s price competitiveness in international markets; and it can enhance the credibility of a government when it comes to containing profligate spending.

Former British Prime Minister David Cameron called this philosophy ‘expansionary austerity’. The problem is that there is not much evidence to support this idea. The EU enforced austerity among its member states in response to the 2007 financial crisis, until it helped propel a ‘double dip’ recession in 2011/12. Following this largely unsuccessful adventure with austerity, the EU turned towards more pro-growth policies, which supported expansions in infrastructure and fixed-capital investment, with notable success.

Using pro-growth policies to reduce relative debt levels has a tradition dating back at least to the days of US economist Irving Fisher. Writing in the aftermath of the 1929 Great Crash, and the ensuing Great Depression, Fischer argued in his debt deflation theory that austerity would be counter-productive since what matters in not the debt itself but the debt burden relative to the level of output (GDP). This is because output tells us the available resources a country has to pay its debts. So, while sharply reducing spending to reduce debt may seem like a good idea, Fisher argued that by reducing GDP, sharp spending cuts would only exacerbate solvency issues, in turn reducing government capacity to service any debt in the future.

Moreover, sharp cuts to spending would lead to a fall in prices, thereby making any nominal debt more expensive in real terms. Following Fisher, economists with a Keynesian bent even call for more, not less, borrowing by governments to help jumpstart growth and output to reduce the relative burden of debts. With low interest rates and strong ‘multiplier’ effects, borrowing to fund infrastructure spending has been supported by the IMF, even in countries with high levels of debt. Which approach should emerging markets take?

How to regain credit status
Based on statistical work and two detailed case studies undertaken for constituencies in South Africa (whose credit rating was recently downgraded), I found most emerging markets that quickly regained their investment grade status did not do so through austerity measures, but instead through policies that raised the level of economic growth, thereby improving their capacity to service debt over the long term.

Measures to restore a government’s institutional policy credibility were still an important factor, and cannot be discounted, but this did not require austerity. Such measures were often more symbolic in nature, intended to signal to markets the government was both willing and able to reduce the long-term trajectory of debt. Short-term debt indicators were far less important in most instances.

To test this thesis, I compared statistical indicators at the time of downgrade and upgrade for 10 ‘regainers’ (plus South Africa) – emerging markets that had their local currency debt downgraded from investment grade to junk status, but managed to get it rated back to investment grade status. 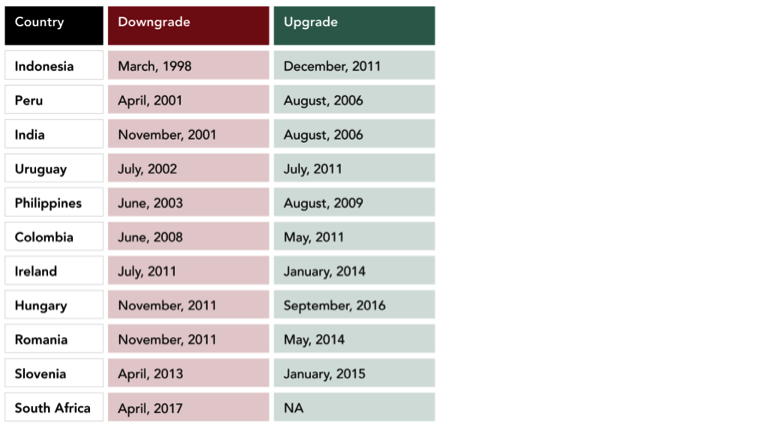 A quick glance at the table above reveals the average time it took to regain investment grade status was 4.5 years. To get upgraded back to investment grade, a country needs to attain higher growth rates relative to its previous level. This is the key ingredient, as shown in Figure 1 below. The average growth rate in the sample rises from around 0% at the time of downgrade to around 4% at the time of upgrade. Growth-enhancing measures improve debt servicing capacity and reduce debt-to-GDP ratios. They may also be easier to enact in the short term than institutional reforms to money collection or the budgetary process. However, high growth alone is insufficient for a country in our sample to have its debt rating upgraded.

Figure 1. GDP growth rate at time of downgrade and upgrade

A country needs to signal a level of fiscal and institutional discipline and reform to the market to convince rating agencies and investors it has the capacity to service its debt in the long term. This is shown in the Figure 2 below, and reflected in a declining fiscal deficit in our sample on average, indicating a country is disciplining its annual government spending relative to government receipts. Fiscal deficits remained negative at -1% at the time of upgrade, but substantially better than the -5% average at the time of downgrade.

Figure 2. Fiscal deficit at time of downgrade and upgrade (Percent of GDP)

Similarly, the average debt service cost to GDP when downgraded was 8% in our sample, whereas it was 4% when upgraded. Debt-to-GDP ratios are, on average, also lower when countries are upgraded compared to when they are downgraded. Debt as a percentage of GDP declines from 68% on average in our sample at the time of downgrade, to 58% on average at the time of upgrade (Figure 3). The average reduction in relative debt levels is driven by an increase in tax revenue (relative to borrowing) in the government’s revenue mix, strong GDP growth reducing relative debt burdens, and independent measures to reduce the relative growth in government spending (graphs not shown).

Figure 3. Debt at time of downgrade and upgrade (Percent of GDP) 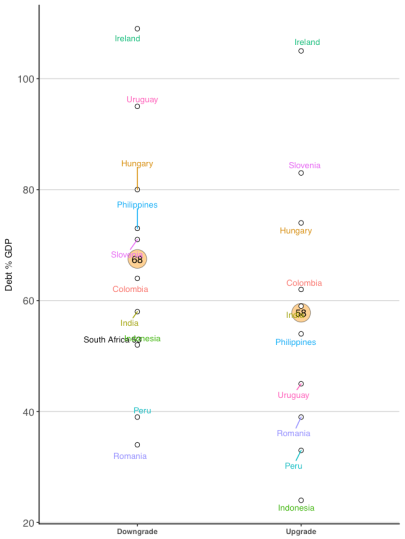 There is, however, considerable variation in the sample. Half the countries in the sample had higher rates of debt to GDP when they were upgraded compared to their relative debt level at the time of their downgrade. This indicates that bringing down even relative debt levels in the short term is not the key consideration for rating agencies, which are evaluating debt sustainability over the longer term.

If higher growth is the key ingredient to ratings recovery – and austerity is not how the ‘regainers’ attained it – the question remains: How did they do it? In general, industrial diversification to drive export growth, supported by high rates of investment, is pivotal.

Evidence shows emerging markets that default tend to be highly dependent on a handful of commodity exports for government revenue, foreign exchange, and economic growth. This fragility makes sense. When commodity prices fall, export revenue, government revenue, and economic output all plummet. Economic diversification allows a country to insulate itself from such a singular price shock and benefit from growing demand abroad due to its sale of dynamic products. Sustained export growth, therefore, requires industrial diversification.

The keys to recovery
Exports offer a vital avenue for expanding production, employment, and growth by drawing on foreign demand and increasing economies of scale. Countries that recover their investment grade rating in our sample tend, on average, to double their growth rate in exports from 4% to 8% (Figure 4). This is significant. Enhancing exports requires positive measures to improve a country’s competitiveness through investing in skills, technology, and infrastructure. It is unlikely wage repression can be a substitute for such measures and for sustaining similar growth rates over the longer term.

Figure 4. Export Growth (year-on-year) at time of downgrade and upgrade 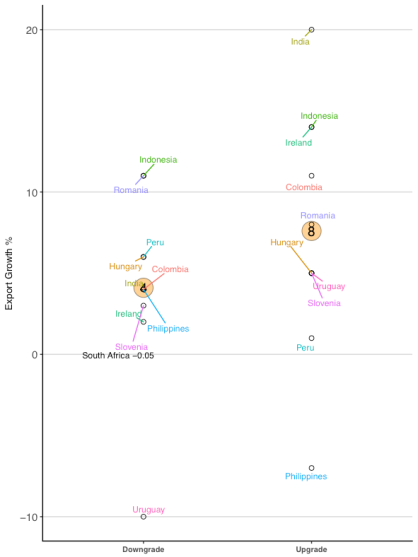 Unsurprisingly, therefore, a higher investment rate proves to be important in a country being upgraded again. Investment is the key underlying driver of changes in economic activity and growth, expanding supply capacity and increasing demand. Investment is the channel through which new technologies are introduced into production, thereby raising productivity levels and the potential for increasing competitiveness and the quality of jobs. Investment as a percentage of GDP increases on average from 20% to 22.5% in our sample between the time of upgrade and downgrade. This is a notable increase and is unlikely to occur in an environment where demand is being depressed through large contractions in state spending.

While the evidence presented in this shortened piece is far from conclusive, it provides an important basis for arguing why now is not the time for emerging markets to implement austerity measures. Far from appeasing investors and credit rating agencies, austerity policies tend to have the opposite affect by suppressing economic growth – the key underlying driver of emerging market ratings recoveries. Instead, accelerating economic growth requires a balanced policy approach, expanding both demand and supply through positive measures.

*A similar version of this post was originally published on the Emerge85 blog, a joint project of John Hopkins University and the Delma Institute. Thank you to Joseph Dana for his helpful edits. This article draws on a paper titled ‘International Evidence: Mitigating the impact of South Africa’s debt downgrades’, prepared for Corporate Strategy and Industrial Development (CSID), School of Economics and Business Sciences at the University of the Witwatersrand, Clothing, Textiles, Footwear, and Leather Stakeholder Initiative Conference: Surviving Junk: Finding Responses for the CTF.

Ilan Strauss is a PhD student in Economics at The New School. He works as an economics consultant. @Ilanstrauss