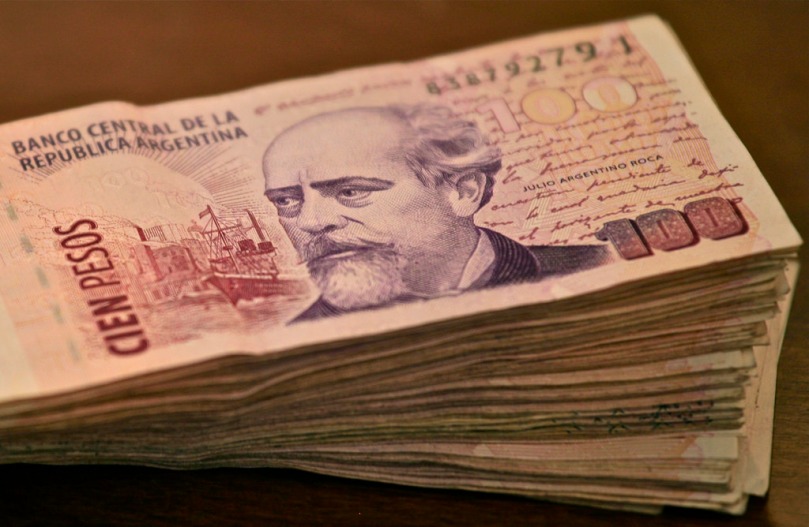 The Argentinian government has requested financial assistance from the IMF to tackle the consequences of a serious currency crisis. Last Wednesday, the government emphatically announced the new terms of such an agreement. However, unpacking the terms of those agreements and the current situation reveals serious concerns about the country’s future .

A few months back (see here), we provided an analysis of the current Argentinian crisis, highlighting the excessive vulnerability of the economy produced by the abrupt financial deregulation carried out by Macri’s administration. Three aspects in particular threatened the country’s future prospects: the deregulation of foreign exchange that failed to stop capital flight, a boom in foreign debt (at a record level among emerging market economies) and the promotion of speculative capital inflows to carry trade (buying financial instruments issued by the Central Bank called LEBAC in order to pursue carry trade operations).

When international conditions worsened and the carry trade circuit came to an end, the “LEBAC bubble” exploded and produced a tremendous foreign exchange crisis that shook the Argentine economy, causing a sharp rise in inflation and a severe recession from which the country has not yet managed to escape.

To curb the flight of currency, the Argentine government ended up requesting financial assistance from the IMF through a stand-by agreement, thus putting an end to the fairy-tale of Argentine financial integration emphatically defined by Macri as a “return to the world”. However, this was not the end. The situation has gone from bad to worse. In less than three months after the agreement, the pressures on the domestic currency persist and the government has announced that will not be able to fulfil the first IMF supervision, asking for further financial assistance and a formal waiver to the first stand-by.

In this context, the state of the economy is worrisome: recession, high inflation, increasing social conflict and serious doubts about the country’s foreign debt sustainability. In this blog post, we analyze what the Argentine agreements with the IMF consist of and suggest, in the context of current financial strife across emerging market economies, the dawn of structural reform of the IMF as a regulatory agency that supports emerging market economies constructively.

¿The dawning of IMF reform?

In order to decipher the current situation, it is essential to take a step back, and analyze briefly the role of the IMF in the recent past. Since the early 2000s until quite recently, the Fund had generally not been an important player in international and regional politics. There are several reasons for this.

First, the Fund had to pay a certain reputational cost for the Argentine default in 2001 and, later, for repeatedly criticizing the subsequent debt restructuring process, which turned out to be very successful. Second, there was the loss of the IMF’s centrality as a financial institution in Latin America. It is worth remembering that in December 2005, Brazil and Argentina canceled all of their debt with the Fund, making it clear that they were unwilling to submit to any sort of restriction on their economic policies. Finally, after the outbreak of the crisis in 2008, the global expansion of liquidity and low interest rates generated a very favorable scenario for external debt of emerging market economies.

This is the context where the opportunity for a new dawning of the IMF appears, after a long decade of marginalization: the Fund could fulfill the role of guaranteeing an orderly exit of global capital from the emerging market economies and restoring market discipline. And even though the the G20 helped restore the IMF’s lost prestige after the global financial crisis of 2008, the Fund never recovered its old role as the privileged lender. So much so that the IMF’s technical offices began to look for a new role for their bureaucrats, trying to redirect them from technical review tasks (the so-called “ex-article IV” missions) towards developing technical assistance agreements with central banks and “comprehensive global models” for global forecasting.

At the present stage, the situation seems to be changing. First, there has been a sharp increase in global economic volatility, compounded by a long series of disastrous events such as the crisis of European banks, Brexit, the Catalan crisis, Brazilian elections and the Trump-China trade war, among other things.Second, the tightening of the Fed’s monetary policy and the end of the so-called tapering has led to a reversal of flows of global capital, from emerging markets back to advanced countries. These capital movements have severely affected emerging markets, causing crises and strong foreign exchange rate tensions.

This is the context where the opportunity for a dawning of IMF reform appears, after a long decade of marginalization: the Fund could fulfill the role of guaranteeing an orderly exit of global capital from emerging markets and restoring market discipline. This issue seems to be centered once again in Argentina, expanding from there to other countries. You see this for example with the market pressures on Turkey to accept a deal with the IMF, which finally did not happen. In the Turkish case, the exit of the crisis was the regulation of operations in the Lira derivatives markets and a dollar deposit agreement with Qatar. In the wake of this, the kind and apparently open-to discussion attitude of the Fund’s director Christine Lagarde during her meetings with the Argentine government should come as no surprise. However, the fact that the IMF has had to change some of its traditional key points should not lead us to think that this time it’s going to be different. In fact, a short review of the terms of the agreement with Argentina reveals quite the opposite..

Argentina’s first deal with the IMF was a stand-by agreement for a period of three years and a total amount of USD 50,000 million in two stretches, along four years. The first stretch was a strictu sensu stand-by agreement of USD 15.000 million, whereas the second was a precautionary agreement of USD 35.000 million.  The aim of the agreement was to reduce the government financial deficit and to guarantee the continuous access to international debt markets. The Argentinean government already received 15.000 million in June (equivalent to 30% of its Central Bank reserves).

However, just before the first round of revision, it turned out that the agreement could not be fulfilled. The Argentinean government formally requested to re-open the negotiation with the IMF, asking for a formal waiver. The reason of this failure was that the government could not achieve two out of three quantitative targets, namely the minimum level of reserves and the maximum rate of inflation. The renegotiation ended on Wednesday 27 September with a joint declaration of Lagarde and Macri.

The updated agreement includes an additional USD 5.000 million for financial support and the advanced payment of the whole precautionary agreement, which is equivalent to USD 11.700 million in 2018 and USD 21.600 in 2019. The main reason for this decision is the Argentinian political cycle: presidential elections will be held next year and Macri’s second term is severely menaced by the crisis. Therefore, the IMF chose to support Macri, allowing him to buy some extra time.

Nevertheless, some serious concerns still remain. The most important is the persistence of capital flight from both domestic and international investors. In the case of domestic investors, the turbulence in emerging market economies and the sudden stop of carry trade differentials determined the capital flight. In the case of international investors, the situation is more complicated. Argentina is, de facto, a dual currency country. Savings are normally dollarized and this implies that a large amount of dollars is necessary for the savings of middle- and upper classes. This is the reason Macri’s administration saw the persistence of the domestic capital fight, combined with an increasing foreign debt and an intense carry trade. Such disequilibria inevitably followed from the capital account deregulation implemented in 2016.

This notwithstanding, Macri’s administration emphatically celebrated the second agreement with the IMF by saying that “the commitments with the sovereign debt are guaranteed”, adding also that “the financial turmoil will easily be removed after the details of the agreement are known”. Under the government’s eyes, the current crisis is a mere deficit crisis. Therefore, the financial reinforcement is a sound way of securing the debt to be paid in 2019.

Nevertheless, there is a missing piece in Macri’s analysis: the huge (and increasing) amount of dollars demanded by the private sector. From this perspective, the future solvency of the Argentinian economy cannot be taken for granted. Not coincidentally, the country risk index remains high. Just a couple of weeks ago it passed the 750 points, which is the highest level since 2015. Furthermore, the difficulties associated with curbing the peso’s devaluation has led researchers to question the ongoing financialization of Argentina’s economy, which has implied a very modest results in terms of growth matched with an increased financial fragility.

From this perspective, many markets actors have suggested that the Argentinean government should receive at least 40.000 million (equivalent to 100% of its international reserves) in the next 14 months in order to be solvent. This is almost equivalent to the amount of money guaranteed by the new IMF agreement. However, it might be insufficient to ensure solvency. According to independent estimations (e.g. CESO), the country would need at least 48.000 million in 2019, particularly between March and June. Even such a forecast is optimistic if we consider the presidential campaign of 2019 (electoral uncertainty has always implied increased capital flight in Argentina) and the adverse international context (for instance: a return of the Brazilian PT to power in the next month which would probably spur financial turbulence in the region). In the worst case scenario, the financial needs of Argentina could easily double.

Furthermore, the volume of economic activities is sharply decreasing. In the context of a higher devaluation, the 32% annual inflation rate forecasted by the government definitely looks unrealistic, particularly if we keep in mind that in Argentina devaluations imply an almost perfect pass-through effect on prices.

In other words, the Argentinean government does not only need the IMF financial support but also the international financial markets’ support (i.e. provision of new loans), which is way more complicated for a traditionally insolvent country going through a crisis for the umpteenth time. In short, it is clear that the IMF money alone is not enough to match the Argentinean financial needs.

Because of this, the stability of the country can be assumed only in the very short term and only by means of the rapid inflow of the second IMF loan. If such an inflow of money is interrupted at any point, a default on the sovereign debt would become inescapable. Even if no interruption occurs, the probability of a default will remain high. Once again, Argentina and the IMF are at the center of the stage, experimenting with new solutions for the emerging market economies’ crises, which so far appear to be ineffective. The question looms: Will the country be facing another “lost decade”?

Roberto Lampa is a Researcher in Economics at the National Scientific and Technical Research Council (CONICET) and Assistant Professor in Development Economics at the University of San Martin (UNSAM), Buenos Aires, Argentina

Nicolas Zeolla is a Ph.D candidate in Economics at the National Scientific and Technical Research Council (CONICET), Buenos Aires, Argentina