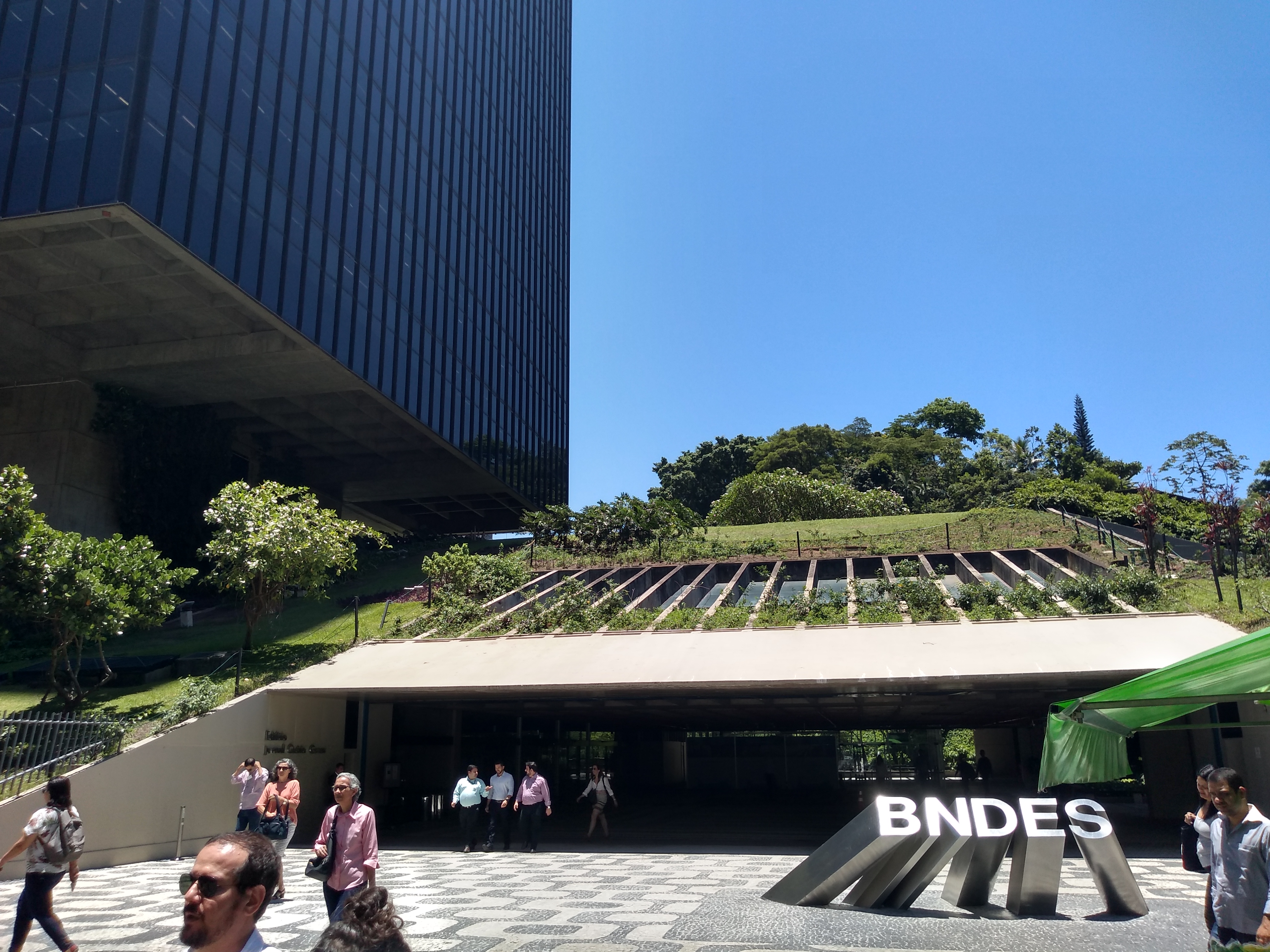 Brazil is in a crisis again. The COVID-19 pandemic has spread across the country and political incompetence has led to a massive health crisis. Investment outflows have been rapid and the Brazilian real has depreciated dramatically. The Brazilian economy is set to contract again after three years of weak positive growth.

Brazil’s development bank Banco Nacional de Desenvolvimento Econômico e Social (BNDES) has announced some measures to deal with the financial instability caused by the COVID-19 pandemic. However, these measures are being criticised for being insufficient. Rather than being a temporary policy mistake that can be corrected easily, BNDES’ passive response is linked to the bank’s structural retreat from the economy over the past five years.

During the 2000s, BNDES was acclaimed as a catalyst of the country’s economic growth. Globally, developing countries such as Indonesia saw the rise of BNDES as something favourable and sought to mobilise their own national development banks.

By acting as a lender and a minority shareholder of major domestic companies, BNDES played a key role in Brazil’s state-activist growth model of which the observers have labelled ‘liberal neo-developmentalism,’ ‘developmental neoliberalism,’ or ‘democratic state capitalism.’ Furthermore, BNDES actively supported national champions’ internationalisation strategy by financing export and investment activities. During and after the global financial crisis, BNDES’ role extended and was used by the government to carry out counter-cyclical operations.

A comparison of key financial indicators between BNDES and the World Bank illustrates the scale of BNDES’ rise. BNDES’ loan portfolio increased by over $200 billion during 2002–2011 and it was comparable to the World Bank’s during the first half of the 2010s (Figure 1(Left)). BNDES’ annual disbursement exceeded the World Bank’s from the mid-2000s and was over three times larger than the World Bank’s in 2013 (Figure 1(Right)). This rapid expansion was possible largely due to significant inflows of Treasury financing, whose share in BNDES’ total liabilities increased from 7% in 2007 to 58% in 2014. 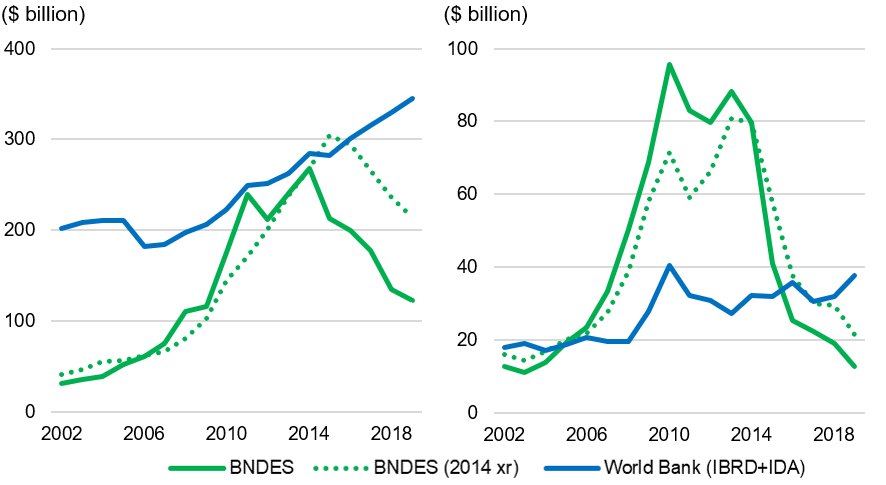 However, there was a critical juncture for BNDES when Brazil suffered a dual, economic and political, crisis during the mid-2010s.

A decline in commodity prices, a rapid withdrawal of foreign capital, and depressed investment sentiment caused the worst economic recession in the history of Brazil. There was also political chaos that involved the impeachment of President Rousseff and a revelation of complex corrupt networks composed of politicians and the country’s largest companies.

BNDES, a key financier of the Brazilian economy, was deeply involved in this turmoil. The development bank’s corporate and political connections and expansionary strategy came under scrutiny, and BNDES reform became a central component of the government’s economic liberalisation and fiscal consolidation. The pendulum began to swing to the other direction.

BNDES’ reversal of fortune was as dramatic as its rise. BNDES’ loans outstanding, in dollars, has more than halved and its annual disbursement has shrunk by 84% since 2014, making both approximately a third of the World Bank’s in 2019 (Figure 1). If one holds the exchange rate constant to erase the effect of currency depreciation from around 2 real per dollar in 2014 to 4 real in 2019, the magnitude of changes is less dramatic, though similar trends are evident.

BNDES’ shrinking balance sheet was facilitated by the end of new subsidised funding inflows from the Treasury and BNDES’ speedy debt payment to the government since 2015. As a result, the proportion of Treasury financing in BNDES’ total liabilities declined to 31% in 2019 3Q. In terms of assets, BNDES’ loans with a subsidised interest rate (TJLP) began to be replaced with loans with a market-linked interest rate (TLP) based on the five-year real treasury rate and inflation rate in 2018. As the existing subsidised loan programme based on TJLP is phased out by 2023, BNDES’ balance sheet reduction is expected to continue.

With the shrinking size, there has also been a multidimensional retreat of BNDES’ operations.

Firstly, BNDES has lost its role as a credit-crunch fighter.

In contrast, Figure 2 shows that the growth rate of credit outstanding provided by BNDES, as well as public financial institutions in general, was below Brazil’s overall growth rate since 2016. Most notably, the growth rate of BNDES was approximately minus 10% for three consecutive years, indicating that BNDES contributed to, rather than countered, credit tightening. 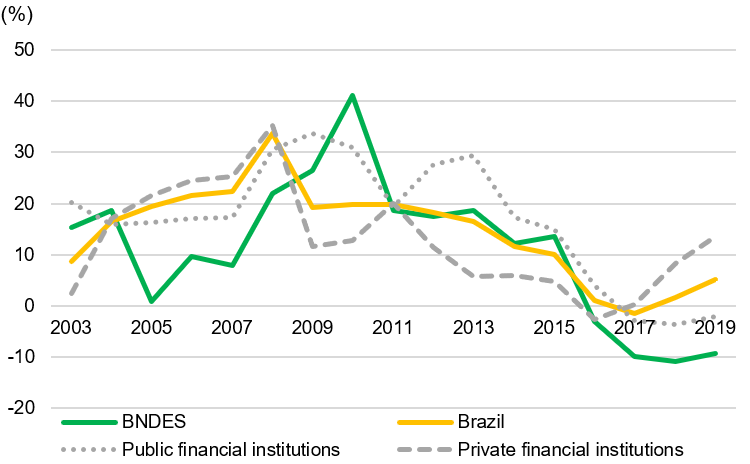 Secondly, BNDES seems to be losing interest in stimulating industrialisation.

During the 2000s, one of the major concerns of the Brazilian government was the deindustrialisation of the preceding decades. With the aim of reversing or slowing down this trend, BNDES actively provided loans to the industrial sector.

However, there are now signs of BNDES withdrawing its efforts to invigorate structural transformation in the form of sector-specific support. Instead, BNDES is increasingly focusing on horizontal measures; concentrating on lending to the infrastructure sector and resulting in this sector’s share in the loan portfolio rising from 37% in 2013 to 53% in 2019. In comparison, modern productive sectors’ shares in loans outstanding have generally shrunk. The total amount of lending to the manufacturing sector nearly halved and its share declined from 26% to 16% (Figure 3). 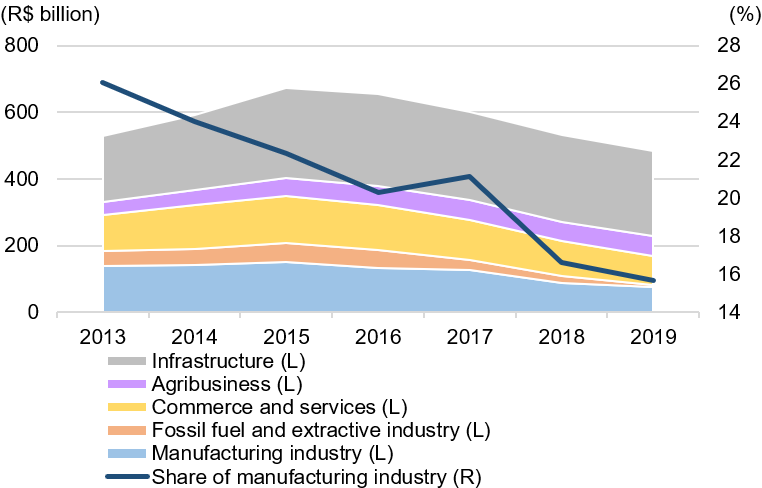 Thirdly, BNDES is shrinking its role as a shareholder of national champions.

During its prime, BNDES became a key minority shareholder in some of the largest Brazilian companies in a swathe of sectors. The number of firms in BNDES’ equity portfolio increased from 130 in 2006 to 157 in 2012, with its average ownership increasing from 11% to 14%.

In contrast, BNDES is now participating in the Brazilian government’s wider privatisation programme. The number of companies in BNDES’ equity portfolio declined from 155 in 2013 to 90 in 2019 3Q. In particular, BNDES’ sales of shares in large firms, many of which were involved in recent corruption scandals, has gained traction over the past few years. BNDES completely moved away from Braskem, a subsidiary of conglomerate Odebrecht, in 2017. Ownership stakes in Petrobras and Vale have gradually been reduced (Figure 4). 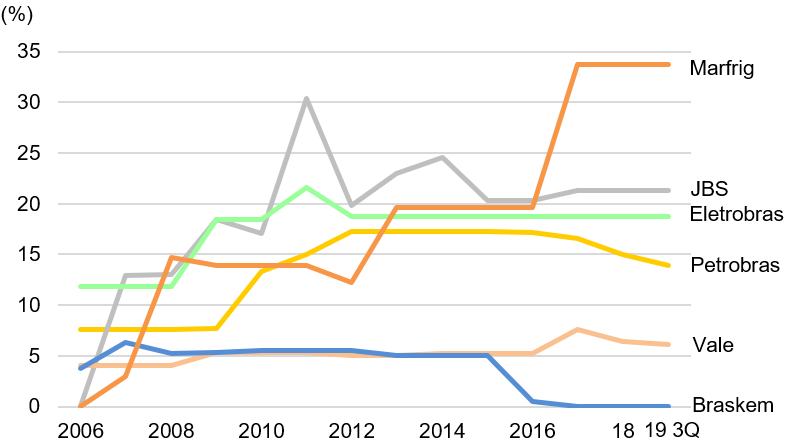 Though not reflected in the graph, BNDES sold all of its shares in Marfrig at the end of 2019. In February 2020, the development bank also sold a stake of 5.6% in Petrobras, which was BNDES’ largest divestiture to date. The timing to sell shares of some other large firms such as JBS is also being explored. Prior to the recent financial turmoil caused by the COVID-19 pandemic, Privatization Secretary Salim Mattar stated that ‘BNDES could sell its entire portfolio.’

Lastly, the financial relationship between BNDES and the government is being disintegrated.

As well as ending subsidised funding inflows from the Treasury, another principal change in this regard is the dividend policy. Between 2002 and 2014, BNDES contributed to government revenues by paying 87% of adjusted net income as dividends on average. In contrast, the government has applied a much lower dividend ratio from the mid-2010s with the aim of strengthening BNDES’ financial position (Figure 5). 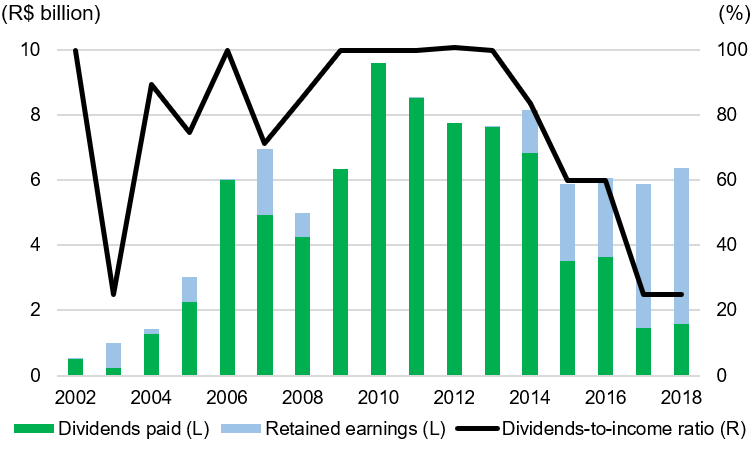 In 2017, a new dividend policy that sets the dividend pay-out ratio between 25% and 60% was institutionalised. This policy was dubbed the ‘biggest reform’ in 15 years. Reformers expect that this policy would allow BNDES to accumulate retained earnings, strengthen capital structure, weaken dependence on state funding, and eventually curb government influence on BNDES’ operations.

Through the multidimensional retreat of BNDES from the Brazilian economy, the reformers may now be seeing the anticipated results. The capital adequacy ratio has nearly doubled over the past three years, recording 36% in 2019 3Q. Return on asset and equity ratios have increased by around five-fold and three-fold, respectively. In the next few earnings announcements, we may even see BNDES’ dividend payments temporarily increase despite low dividend ratio due to BNDES’ recent sales of corporate shares.

Using these financial performances as evidence of success, the reformers will try to continue the market-oriented restructuring which has recently been put on hold due to the pandemic-induced economic instability. Despite these circumstances, BNDES is still surprisingly ambitious in its potential contribution to Brazil’s development. How the development projects in demand will be financed remains uncertain. Furthermore, the demand for the ‘return’ of BNDES is increasing amid the COVID-19 pandemic.  As a result, the bitter policy debate on the desirable role of BNDES in the Brazilian economy will continue.

In sum, the trends since the mid-2010s suggest that we are seeing the beginning of a new chapter in BNDES’ 68-year history. More broadly, the multidimensional retreat of BNDES’ operations, as well as BNDES’ passive response to the COVID-19 pandemic, may be a signal of the beginning of the end of active state capitalism in Brazil. The retreat of BNDES may also be highlighting the fragility or weak persistence of democratic state capitalism in the developing world. Developing countries which have been emulating Brazil’s model of state capitalism should closely study the rise and fall of BNDES and refine their strategy.

Kyunghoon Kim is a PhD student in the Department of International Development at King’s College, London.