No, it’s not a recession, defined strictly in technical terms, i.e. on the whole, the level of activity hasn’t fallen, even though certain crucial sectors, like automobiles, are seeing a fall. What we have instead is a slow down, a severe one at that, with falling rate of growth of GDP for five straight quarters (figure 1). The Indian government is hiding behind economic jargon to obfuscate the reality that is biting the economy. The writing is on the wall. The Indian economy is facing a severe crisis and the sooner we come to terms with it, the better. Based on a recent paper in Economic and Political Weekly, this blog discusses the changing growth levels in the Indian economy, the reasons for the recent slowdown, and some possible short and long term solutions.

A Slowdown as Good as a Recession

Economic activity normally moves cyclically around an average, with the former constituting the business cycle and the latter the trend rate of growth. A higher than average rate of growth is referred to as a boom and a lower as a slowdown. But if a protracted slowdown drags the average itself down, as has been the case in India (figure 1), it cannot simply be considered business as usual with the expectation that a rebound is just around the corner (see figure 2 as a symbolic representation). 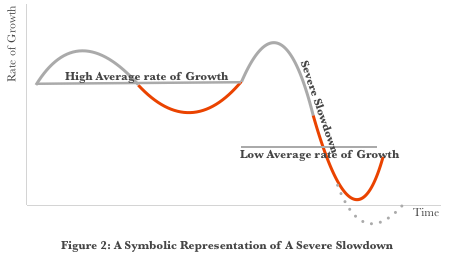 Two things are noteworthy here. One, if the slowdown is on account of demand factors (and not supply constraints), it means both machines (and raw material) and labour are under-utilised and unemployed respectively. To give the readers an idea about the extent of shortfall in demand — thermal plants, the key source of energy providers to enterprises and households, running at half their capacity (49%) shows a very severe shortage of demand in the economy (although from an environmental perspective it is not necessarily a bad thing). This entails a huge waste of existing resources which could have been utilised and employed had there been enough demand in the economy. Two, this severe slowdown may not necessarily ebb at a positive rate of growth (as shown by dotted line in figure 2), If it goes into negative territory this slowdown itself can end up becoming a recession. So, the finance minister’s claim that it will not be a recession ‘ever’ is merely an article of faith rather than sound economic logic.

Any movement in economic activity is cumulative in nature. Since pessimism breeds pessimism, unutilised machinery gives signals to the capitalists to further cut down on investment, thereby, cutting demand for other capitalists and bringing the rate of growth further down. Some of the sectors of the economy, especially manufacturing, have indeed witnessed an absolute decline in production over the last few months.

Capitalists invest based on expected profitability which is influenced by current and past profitability.  Profit rates can go up either as sales figures improve or the capital stock on which it is calculated falls in value.

The former is related to the demand side. But in the absence of proactive demand side interventions in the Indian economy, the downslide in profits is likely to continue. The latter route requires capital to have adequately eroded. But what is considered adequate here? The capacity to produce automobiles has to go down so sharply that producing the current low demand for cars itself requires new factories to be set up and the cycle for production is kick-started again.

Leaving the matter to the latter route, however, is unnecessary, prolonged and torturous way out of a slowdown. Unfortunately most of the interventions announced by this government -e.g. corporate tax cuts, income tax cuts with fixed deficit targets, relaxation of credit norms, declining interest rates etc. – are all supply side interventions that ignore the demand side completely.

Why is the Indian Economy in Such a Mess?

The sources of the mess are mostly self inflicted. In its first term, the Modi government came up with two hare-brained policies which would end up affecting a vast majority of the Indian people, whose income forms the biggest source of mass consumption demand of this country.

Demonetisation was one of these ideas, which was meant to tackle corruption. Rather than achieving its stated objectives, demonetisation  led to debilitating the rural economy and the huge unorganised sector, both of which were primarily cash based – and are one of the biggest sources of domestic demand in the Indian economy.

Closely following demonetisation, came the ill-designed anti-federal universal indirect tax system, the much celebrated Generalised Sales Tax (GST) regime. This tax affected small and medium enterprises and petty producers since they were not able to cope with the heavy demands of compliance, which includes heavy penalties for small problems such as delays in filing these taxes. These businesses don’t have deep pockets to absorb such shocks. This has affected the lower and mid-income middle classes the most.

The pattern and extent of fall in demand of durable goods is a testimony to this. Even biscuits worth Rs 5 (7 USD cents) are not selling, forcing biscuit factories to shut down, which has lead to the retrenchment of upto 10,000 workers. Recent reports on consumption data, as published here, show that monthly per capita expenditure in rural areas fell by 8.8 percent in 2017-18 as compared to 2011-12, the only time it has fallen in the last four decades! The reason is that the growth rate of agricultural real wages has been close to zero since 2014-15 (PM Modi’s first term).

The Government’s Supply Side Interventions

Amidst such a clear demand driven slowdown, the government has got the wrong end of the stick. Its entire focus has been on availability and cost of credit to facilitate investment. Even if the banks were to make loans available at cheaper rates, there have to be takers for those loans. In a depressed economy with low capacity utilisation and falling demand, higher access to loans will not induce investment.  Why would a firm add to its capacity just because loans are cheaper if even the current capacity is lying unused? The same holds true for corporate tax cuts. Corporate tax cuts will increase the post tax profits of the corporations but why should that induce higher investment? It will just end up as greater purchase of short term financial assets or increased speculation in the stock market to make a quick buck while the economy remains depressed. No wonder the Bombay Stock Exchange’s market index (Sensex) is scaling new heights every day, even as the real economy crumbles. This is a classic case of what Keynes described as an ‘enterprise being a bubble in the whirlpool of speculation’. Cheaper credit at this stage, without any commensurate fiscal interventions, may perhaps increase this speculation because then betting can be done with borrowed funds at cheaper rates.

Keynes argued that fiscal policy is far more effective than monetary policy since it directly influences the level of economic activity. However, the fixation on the deficit target of 3.3% of GDP means the government expenditure itself becomes a function of the GDP instead of being countercyclical. Unless we break out of these self imposed constraints, there is hardly any scope for revival.

It is worth noting that a conventional fiscal stimulus is only a short term solution. The Indian economy is not just in a trough of a usual business cycle, it is also going through a structural crisis (i.e. it is a crisis of both the trend and the cyclical component of economic activity). To tackle the structural crisis would require identifying sources which can deliver equitable and sustainable growth. The government could, among other initiatives, aggressively invest in green infrastructure as a specific form of fiscal intervention. Such an investment has the benefit of generating a multiplier, but also includes several additional benefits: Green growth is usually more inclusive both because of its higher employment elasticities as well as its environment conserving potentialities. Unfortunately, at a time when a comprehensive plan for the revival of the Indian economy is sorely needed, the Indian Planning Commission has been dismantled.