The macroeconomic consequences of the CODID-19 pandemic in the EU economy are materializing against the background of underlying structural challenges. Ensuring long-term convergence and stability between EU countries will require coordinated fiscal, wage and industrial policies. This blog post finds that EU countries are stuck on different trajectories in their economic development. Core countries, periphery countries, East European countries and financial hubs have responded differently to increasing European economic integration. This leaves Europe mired in structural polarisation, where political tension relates to diverging economic developments and increasing gaps in the evolution of technological capabilities. As a consequence, counteracting polarisation and promoting convergence requires a coordinated strategy that includes fiscal, wage and industrial policies.

Several EU countries were already on diverging macroeconomic development paths when the COVID-19 pandemic hit, but the macroeconomic consequences of the crisis must be expected to further accelerate existing divergences. Even though large parts of the EU experienced an economic upswing in the years running up to the COVID-19 pandemic, this temporary upswing in the business cycle served to mask the underlying tendencies towards structural polarisation in Europe, which will become more apparent over the course of the current crisis.

In a study recently published in the Journal of Evolutionary Economics, I argue with Claudius Gräbner, Jakob Kapeller and Bernhard Schütz that essential factors for explaining the long-term polarisation between EU countries are to be found in the unequal regulatory conditions in the context of the European ‘race for the best location’ (for example, in the areas of labour market, tax and corporate law or financial market regulation), as well as in the different technological capabilities across EU countries.

We show that technological capabilities in EU countries are distributed unequally; EU countries remain structurally polarised, i.e. they are stuck on different developmental trajectories that contradict the political goal of ensuring convergence and stability in the EU. Notwithstanding short- and medium-term cyclical developments, existing differences in technological capabilities will continue to fuel a process of economic disintegration in the EU if policy-makers fail to counteract the polarisation trend by introducing a coordinated policy strategy that should include fiscal, wage and industrial policies.

Path-dependent development models in the EU

Our study highlights the relationship between the process of European integration and existing economic polarisation tendencies in the EU. For EU Member States, European economic integration has brought an increase in trade and financial openness.

We show that macroeconomic developments (measured in terms of common indicators such as GDP growth, unemployment and the current account balances) have not responded uniformly to the increase in economic openness that is associated with deepened European integration. Based on our empirical analysis, we are able to identify four different developmental trajectories, which allow for an analytical separation of core countries (such as Germany or Austria), periphery countries (such as Italy or Greece), catch-up countries (mainly in Eastern Europe) and financial hubs. The latter group represents countries which serve as a financial centre with favourable tax policies for high-net-worth individuals and institutional investors (e.g. Luxembourg) or try to attract investments from multinational firms by setting low corporate tax rates and undermining common regulatory standards (e.g. Ireland). Both types of financial hubs draw on designing specific regulatory environments to the benefit of international investors or the financial sector.

Table 1 summarises our findings and shows the distinguishing characteristics of those economies that follow a certain developmental trajectory. 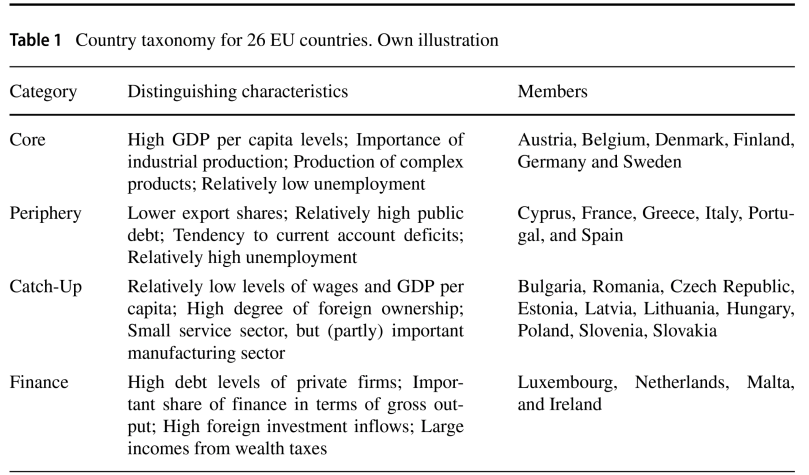 Technological capabilities and structural change: How the strong get stronger

In the four country groups described above, developmental trajectories are related to changes in industrial structures across Europe. The defining characteristic is that technological capabilities (proxied by data on the complexity of exported goods) are distributed unequally among European countries.

Figure 1 shows that there are still considerable differences within the four country groups listed above. First, core countries differ in their structural development, which reflects the fact that some of these countries are struggling to hold on to their position (e.g. Finland and Belgium), while others have managed to expand their technological dominance (mostly Germany, but to a smaller extent also Austria). Second, Figure 1 does not show a single periphery country whose technological development has made decisively positive progress over the relevant period. Third, while some of the East European catch-up countries have managed to improve their technological capabilities (e.g. Czech Republic, Hungary, Slovakia, Poland), others have not. What the countries that have gained in terms of technological capabilities have in common is their geographical proximity to Germany and their successive integration into the supply chains of Europe’s manufacturing core. This finding indicates that the economic catch-up process of East European countries is not necessarily tied to a technological catch-up process, as evidenced most forcefully by the two outliers, Bulgaria and Lithuania. Fourth, the differences between financial hubs that can be seen in Figure 1 are particularly large, but this can arguably be explained by their different institutional strategies: Ireland’s role as a corporate tax haven manifests itself in a massive technological upgrading, while the more asset-based strategies of the Netherlands and Malta are associated with a tendency for deindustrialisation. And finally, although the empirical analysis in our study on how macroeconomic developments in EU countries have responded to increased European integration suggests that France is currently part of the periphery, it remains on the edge and might also be loosely considered to be part of the core.

Figure 1: Self-reinforcing effects in the development of technological capabilities in Europe 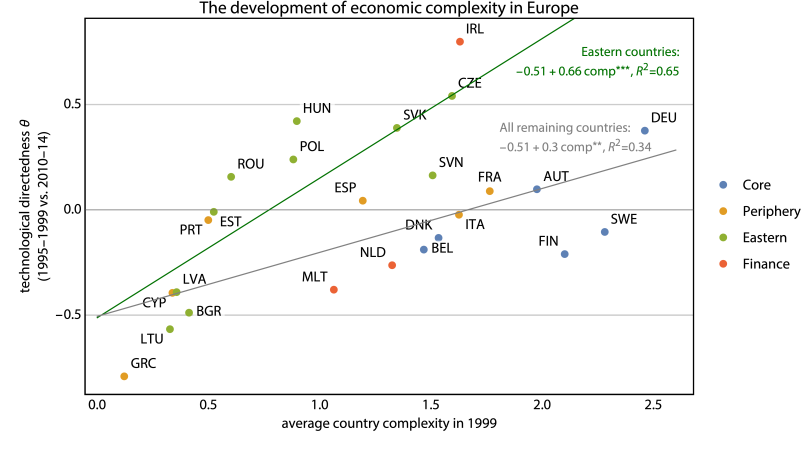 Source: Gräbner, C. et al. (2019), Structural change in times of increasing openness: assessing path dependency in European integration, Journal of Evolutionary Economics. Product complexity of exported goods serves as a proxy for technological capabilities. The green line was derived from fitting a linear equation to the ten East European countries. The grey line was derived from a linear regression for the remaining EU countries in the data set.

Macroeconomic divergence in Europe is fuelled by existing differences in technological capabilities. They follow a path-dependent pattern, where past success breeds further success and fundamental changes can only be achieved with more fundamental path-breaking policies (as, for instance, in the case of Ireland). Results from the economic complexity literature suggest that technological capabilities are of prime importance for assessing the future developmental trajectories within given political and institutional constraints. As a consequence, the lack of structural convergence in the existing European system raises the prospect of increasing economic tensions in the future, which could be further exacerbated by the uneven consequences of the COVID-19 pandemic across the EU’s member countries.

Against this backdrop, it is highly likely that the differences in developmental trajectories which can be observed within the EU represent a ‘lock-in effect’ in economic development. This situation can only be unlocked by large-scale policy interventions, because on current evidence there seems to be no prospect of a ‘natural convergence process’ emerging. The country taxonomy, which we develop in our study, also proves useful in thinking systematically about what needs to be done to promote convergence and to counteract economic disintegration in Europe. Against the background of the long-run importance of technological capabilities for economic development, the core of such a policy plan must include targeted (vertical) industrial policies.

Our proposals, which should be viewed as a starting point for more in-depth policy discussions, are summarised in Figure 2. In particular, the periphery countries need an investment initiative that serves to diversify and modernise their industrial structures. Targeted industrial policy should be geared towards improving non-price competitiveness to improve the prospect of sustainable development in the long run. Such an investment initiative could be financed either by additional European taxes or by external funding sources. Additional tax revenues may come from a European corporate tax or a European wealth tax. In terms of external financing, the European Investment Bank could, for example, issue investment bonds that could be bought by the European Central Bank.

In our view, a sustainable strategy also requires policies that allow for a continuation of the catch-up process in Eastern Europe. In this context, measures should be geared towards allowing for higher wage growth in the East European countries relative to other EU countries. Furthermore, labour standards should be adjusted gradually to match the higher levels in the core countries. Such an adjustment of wage and labour standards would not only provide a stimulus to aggregate demand, it could also help to reduce inner-European tensions related to migration and job displacement. To ensure that the respective countries retain and improve their technological competitiveness further, the strategy for Eastern Europe should be complemented by targeted (vertical) industrial policies.

The core countries (especially Germany) have been running significant current account surpluses in the years running up to the COVID-19 pandemic. This means that they possess considerable resources to improve the social cohesion of their populations by reducing unemployment and tackling social inequality as well as deficiencies in public infrastructure. Another possibility is to pursue policies that lead to higher wage growth for low- and middle-income households (e.g. through legislation on minimum wages, wage bargaining and trade unions).

Finally, in terms of moving towards more sustainability in Europe, we argue that it is necessary to push for the reregulation of the financial sector in the group of financial hubs. Particularly low corporate tax rates in financial hubs (which attract corporate profits through tax incentives) make it clear that a European initiative leading to a substantial increase in the corporate tax rate is required to counteract the existing race to the bottom in regulatory standards. Increasing corporate taxes would also provide the public sector with the necessary resources to pursue targeted industrial and social policies.

Such policies would hopefully put EU countries in a position to address core future challenges, such as climate change or digitisation, in a proactive manner, while at the same time striving for deepened integration and convergence in Europe. 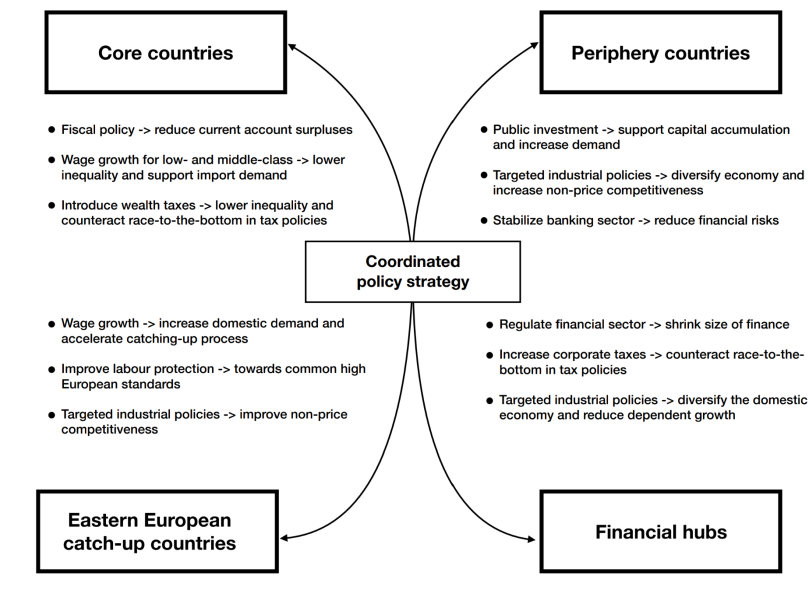 Philipp Heimberger is an economist at the Vienna Institute for International Economic Studies (wiiw), and at the Institute for Comprehensive Analysis of the Economy (Johannes Kepler University Linz).